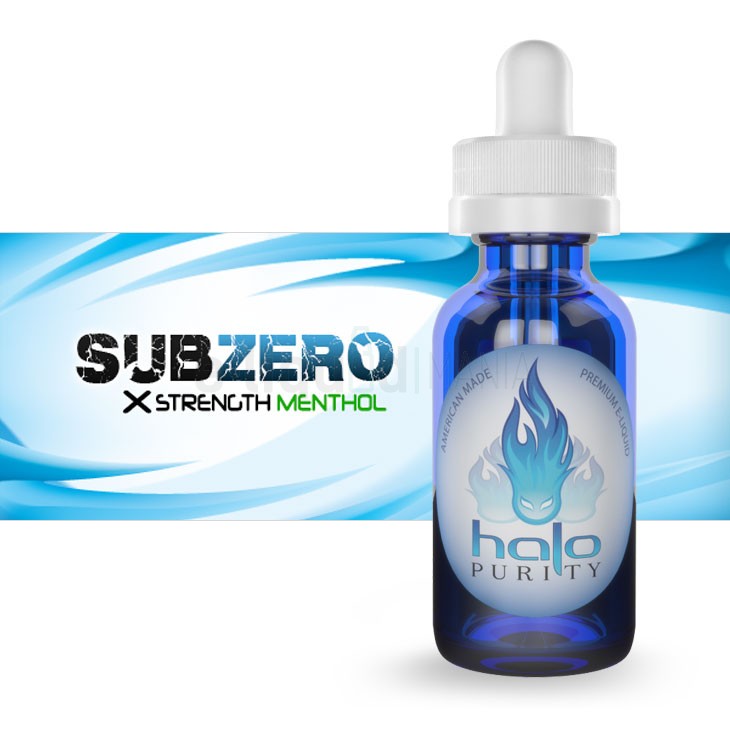 Among e-cigarette owners who prefer menthol e-liquids, there seem to be two schools of thought. Some people prefer e-liquids that attempt to recreate the taste of cigarettes by blending tobacco and menthol flavors. Others would rather have the strongest blast of menthol combined with the cleanest taste possible. I fall squarely into the second camp; to date, I’ve found that when an e-liquid tries to do both tobacco and menthol flavors well, it fails at both. For nearly two years, I firmly believed that Volcano Menthol Burst was the best menthol e-liquid in the world. I had tried one menthol e-liquid after another, and nothing came close to its winning combination of clean flavor and extreme level of menthol. Today, however, there is a new champion. Halo SubZero is the best menthol e-liquid I have reviewed to date.

Halo SubZero is a pink, slightly viscous e-liquid with a neutral, minty smell. It has a slight resemblance to Halo’s recently released Kringle’s Curse e-liquid, which is also a high-menthol e-liquid with a candy cane flavor. Where that e-liquid tastes like a candy cane, though, SubZero has a flavor more like that of plain, unsweetened peppermint. It’s an extremely refreshing flavor for someone who doesn’t like e-liquids with a lot of sweetness, but the peppermint flavor is applied with a light hand. In an e-liquid that exists primarily just to provide a cold blast of menthol, the peppermint flavor of SubZero remains far in the background.

When I reviewed Volcano’s Menthol Burst e-liquid, I was blown away by the strong menthol flavor and amazed by the fact that no other menthol e-liquid has come close to its level of strength in the two years since. My understanding is that it’s Volcano’s best selling e-liquid and I have long wondered why no other e-liquid company has attempted to duplicate or improve on the formula. Halo SubZero is the first e-liquid that has managed to approach that level of menthol, and I have to say that it even seems to have more menthol than the e-liquid that might have inspired it. Truly, if you’re looking for the highest menthol e-liquid available, Halo SubZero is now that e-liquid.

SubZero and Menthol Burst are both e-liquids ideal for menthol lovers who want an e-liquid with a taste neutral enough for everyday use. If you’ve tried Volcano’s offering, you might be curious as to how Halo SubZero compares. In this reviewer’s opinion, the taste of Menthol Burst could be characterized as that of artificial mint with slight sweetness, while SubZero tastes more like a hint of plain peppermint extract. It’s a very natural tasting flavor and I have quickly come to love it.

Although I love reviewing tobacco e-liquids because of the incredible variety from one product to the next, menthol e-liquids are what I choose to vape every day. I like nothing more than an e-liquid with a huge blast of menthol and a pleasant, neutral flavor that doesn’t start to leave a lingering sweetness on the tongue with constant use. Halo SubZero delivers on those better than any other e-liquid I’ve ever reviewed, and I couldn’t possibly give it a higher recommendation.