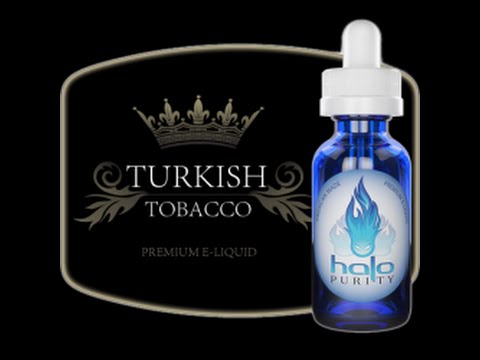 Halo has really been on a roll lately. Halo has earned its excellent reputation in the e-smoking community by creating many different interpretations of tobacco and menthol flavors. Though the interpretations vary, almost all are remarkably good. My Halo e-liquid reviews are among the most positive on this website. Recently, Halo took its product lineup to new territories with the Midnight Apple and Belgian Cocoa e-liquids. Quite simply, they are the best apple and chocolate e-liquids I’ve ever tasted. Halo tends not to release new flavors frequently, so I was quite excited to find out that the company was returning to its roots with the new Turkish Tobacco e-liquid. I needed to order some Fusion e-liquid for an upcoming series of zero-nicotine e-liquid reviews, so I added some of Halo’s Turkish Tobacco e-liquid to my shopping cart and anxiously awaited the shipment.

A lot of e-liquid fanatics like to talk about “steeping.” They believe that an e-liquid improves in flavor as it ages. Some e-liquids, a few people say, don’t reach their peak flavor until weeks or even months after bottling. I tend to disagree with that slightly; “steeping” is what happens when you extract compounds by soaking something in a solvent. I can’t see how that takes place in a bottled e-liquid. That being said, I do agree that the flavors of e-liquids change over time — most likely because certain volatile compounds start to degrade. Even Halo suggests that its e-liquids change greatly in flavor over the first 48 hours after the bottle is opened. In one case — Halo’s Prime 15 e-liquid — I found the change so disappointing that I had to reduce the score I would have given the product.

I mention steeping time because, if you buy Halo Turkish Tobacco e-liquid within a couple days of bottling as I did, you may notice an off-putting flavor. When I first opened my bottle of Turkish Tobacco, I tasted a strong butter or caramel flavor that reminded me of RY4 — an overly sweet “tobacco” flavor I’ve never really liked. Within a couple of days, that flavor was gone and very little sweetness remained. In fact, Halo Turkish Tobacco became one of the best “analog cigarette” e-liquids I have ever tried.

The vapor production of Halo Turkish Tobacco is absolutely astronomical. Although the mix of the base liquids — propylene glycol and vegetable glycerin — in an e-liquid has a lot to do with its vapor production, the flavoring agents are crucial as well. Flavor agents produce little vapor; you might need to use a mild flavor in high proportion to get the flavor balance you want in an e-liquid, but in doing so, you’ll reduce the e-liquid’s vapor production. Halo knows that rich, strong flavors are the way to go; they can be used sparingly to create an e-liquid with great flavor and vapor production. Halo’s Turkish Tobacco is a great reproduction of the flavor that tobacco lovers adore; it has a dry, smoky flavor with only the slightest touch of sweetness. The throat hit is quite powerful with a scratchy character that I don’t recall from other e-liquids I’ve tried previously.

Keep a bottle of water nearby when vaping Halo Turkish Tobacco; it’s a powerful e-liquid that’s likely to leave you a bit thirsty. If what you’re looking for is an intense and realistic tobacco e-liquid, though, Halo Turkish Tobacco is perfect in every way. I highly recommend this one.