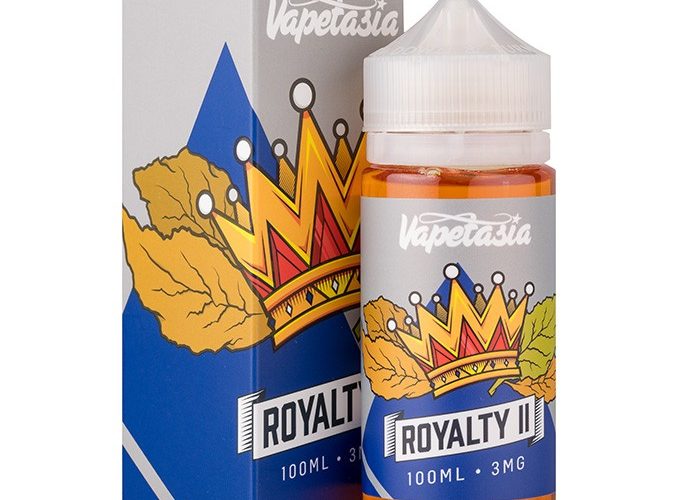 Royalty II by Vapetasia is an e-liquid that was made specifically for vapers who love rich and complex e-liquids. Vapetasia won a special place in the market with its Killer Kustard e-liquid, earning the company a recognition of being a master at making custard e-liquids. Royalty II is another custard e-juice blend, but it couldn’t be any 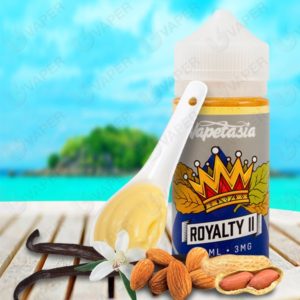 more different from Killer Kustard. This e-liquid has creamy custard and vanilla flavor along with nuts and mild tobacco flavor. The result is a sumptuous e-juice that does not taste like anything you have ever had. This e-juice is for vapers who want nothing but the best blends. It is arguably the most unique flavor in the entire Vapetasia line.

You can get Royalty II and other Vapetasia e-liquids from any well-stocked vape store. A 100ml bottle of Royalty II is usually sold for about $32 at some vape shops, but you can get it on Ultimate Vape Deals for just $11.99.

Royalty II by Vapetasia is a mix of dessert and tobacco e-juice flavor. It is a little sweet, but the sweetness is not too strong. The creamy flavor and the nutty taste complement the sweet taste very well. When vaping Royalty II, you will get the taste of creamy custard and vanilla. On the exhale, the mild tobacco flavor is more noticeable with hints of nuts. The creaminess of the blend lingers on in your mouth. There is a reason Vapetasia chose to name this e-liquid Royalty II, because it is fit for royals. The only e-liquid flavor that comes close to resembling this blend is RY4, but it is very different from that classic tobacco mix. Royalty II is one of those e-liquids that you will want to vape alone.

You need to steep Royalty II if you want to enjoy its taste to the max, but if you buy a bottle of this e-liquid and it doesn’t taste quite right, you can steep it for about two weeks.

Royalty II by Vapetasia has a vegetable glycerin (VG) and propylene glycol (PG) ratio of 70/30. You will have no problems vaping this e-liquid from either a sub-ohm tank or an RDA. The vapor production of this e-liquid is just what you expect from a 70vg blend. It will give you thick clouds of vapor especially when you turn up the wattage.

Royalty II comes with different nicotine concentration levels. You can get this e-juice with either 0mg, 3mg, or

6mg of nicotine. The throat hit of this Vapetasia e-juice is not as strong as you may expect it to be. Although it contains tobacco flavor, this e-liquid has a very smooth throat hit. The intensity of the throat hit that you will get from vaping Royalty II depends on the nicotine strength that you select. At 3mg, the throat hit is mild. If you want a kicking throat hit, you can go for 6mg.

Royalty II comes in a 100ml chubby gorilla unicorn bottle. There is a colorful label on the bottle which features the image of a crown as well as tobacco leaves. The bottle comes in a box which has a design that is similar to the one you’ll find on the label. It is a hassle-free process to fill your tank or drip on your coils directly from the bottle.

Vapetasia is one of the major players in the US e-liquid market. This company, which is based in Las Vegas, Nevada, has up to seven e-liquid lines with different e-juice flavors. Beside Royalty II, the other e-liquids in the Vapetasia series are Killer Custard, Milk of the Poppy, Rainbow Road, Pineapple Express, and Strawberry Killer Kustard.